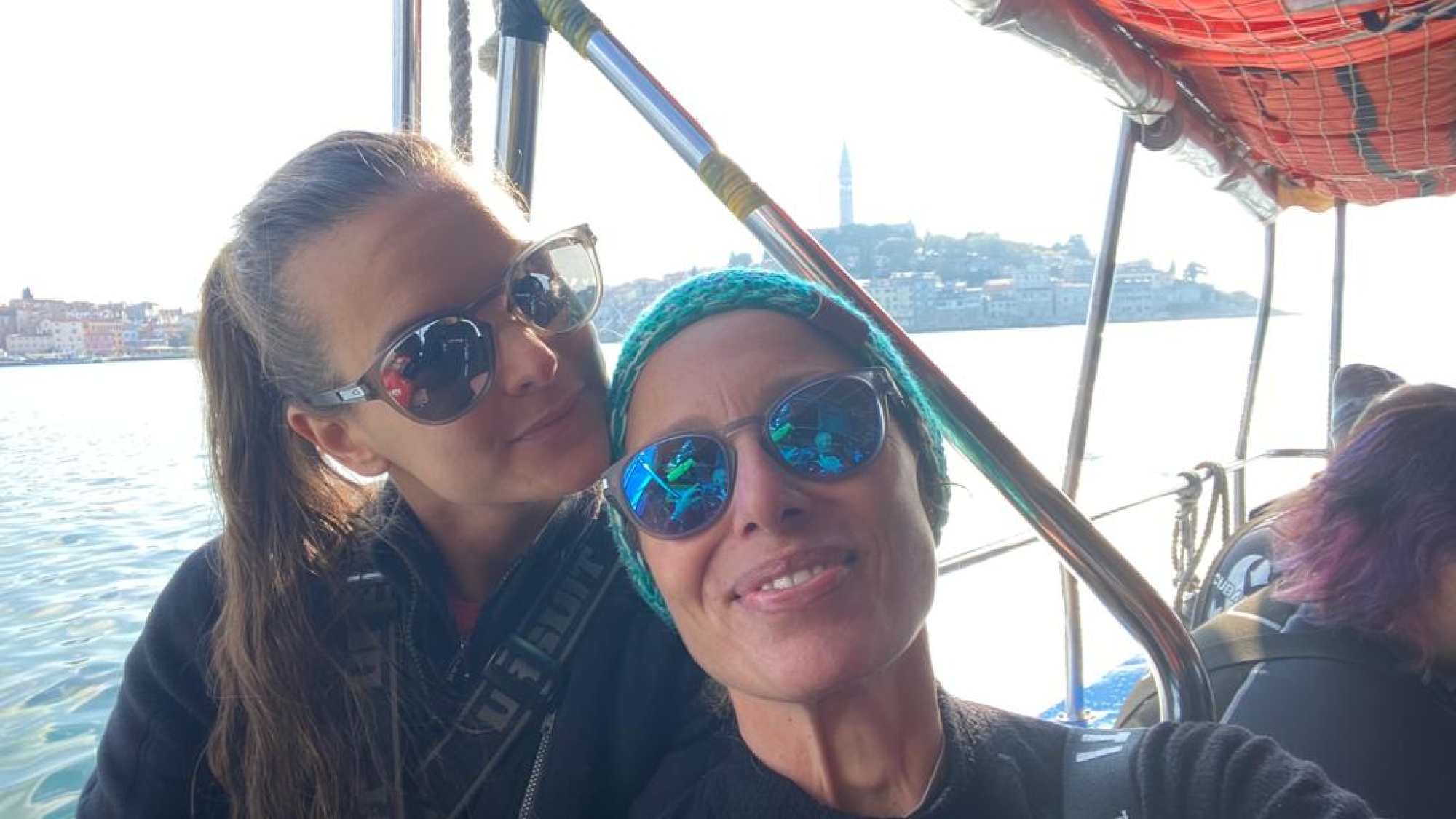 Summary of the previous episode

Our heroes, the divers of Schio Sub, Aquesmotion and XR Scuba Academy, after a first day of diving on the wrecks of Baron Gautsch and Giuseppe Dezza are ready for new dives.

As always, our Sicilian French reporter Julie Sferlazzo will tell us all about it, on a mission in Croatia on behalf of UnderwaterTales.

The first surprise on Sunday morning

Sunday morning, we had an appointment at 8, fatigue and pain are felt, but a new wreck awaits us: the cargo steamer Hans Schmidt.

Unfortunately, the weather is less forgiving than the previous day but our enthusiasm does not suffer at all.

Certainly, the jumps of the dolphins that keep us company for a few minutes, as if they were giving us a happy and unexpected good morning, contributed to surprising us even more at the nature that surrounds us.

The route and the briefing

The journey to reach the dive site takes longer than an hour. So I decided to take advantage of the browsing time to interview my mates about their first impressions: each of them is happy to play the game.

From the results obtained, a common feeling emerges: we all feel satisfied by the existing experience despite the cold and the moderate visibility.

Then, the schedules and briefings for each of the groups begin based on the level of the individual components.

Let’s proceed with the dressing and the final checks so as to realize that I have not taken the ballast at the diving: but do not panic….

A kilo here, a kilo there and with the proverbial solidarity that is created between divers I can make up for it!

It was built in 1920 in the Netherlands under the name of ALBIREO. But it has been called “Istra” because its real name was unknown. After being sold to a new owner, Heinrich Schmidt, it was renamed. And therefore, it bears the name of its last owner in Germany.

The cargo ship Hans Schmidt was torn apart and sunk on January 23, 1943, following an explosion caused by a submarine mine. On her last journey she carried weapons and ammunitions.

The wreck lies in the right position and its steel parts are almost intact. It is divided into two parts: the 10-meter-long bow and the remaining part after about ten meters. The particular type of anchor has now been out of production for over a hundred years. It represents a real curiosity and gives a historical significance to the wreck.

The part of the front superstructure on which the command bridge was located is quite well preserved. All along the ship we find the remains of several old nets, therefore it is not advisable to explore the inside of the ship.

You have surely already felt it: it has been a weekend full of emotions and growth!

I was a bit disoriented not to say shocked as I was catapulted into a completely new reality for me. Absence of my usual reference points, water temperature (very cold for a Francosiculana!). And then very low visibility (I am not a “mud” diver or a lake diver), a traffic jam of divers at an altitude of 6m around the top. Which was the only point of reference for not getting lost in the turbidity of the Adriatic during the decompression stop !!!

However, living situations outside one’s “comfort zone” undoubtedly allow one to grow across the board.

Getting involved, trying new activities, discovering places unknown until now. Never fearing the unknown before having thoroughly evaluated and then experienced it. These are behaviors that allow us, in my opinion, not to let ourselves go to the silent torpor of the daily “routine”.

All this must obviously take place in the awareness of one’s own limits but always pushing the boundaries that our mind imposes on us without us realizing it. Often, we don’t trust our psychophysical abilities enough, when instead we should look deeper into ourselves in order to understand our intrinsic value.

And when we finally succeed, when we discover beauty, hitherto unknown within us, we also become able to perceive the beauty around us. On land, in the sea but also in human beings, everything becomes a moving experience. We realize how simple and clear it can be to reach joy and serenity.

These three days were exciting because I was allowed to closely observe pieces of history hidden in the seabed and share this experience with people animated by the same passion as me.

Julie Sferlazzo, a reporter on Croatian soil, is a product of the nursery of the Diving Center Saracen.