It is the last stop on the 2018 XR Wreck Tour which brings together a team of SSI Extended Range divers to promote and consolidate the XR Mares movement within the diving community. It starts from Santa Caterina, on the Ionian side of Salento, with destination Marina di Gioiosa Ionica, in Calabria.

On Monday morning we left for the third stage, destination Marina di Gioiosa Ionica, in Calabria. On Stefano’s minibus, crammed with divers and equipment, we crossed the entire Ionian coast in an interminable journey of six hours.
And finally, we met Tony Scontrino, the last member of the team to join.

The next morning we met on time at the Diving Megale Hellas, managed by Roberta Eliodoro, who gave us the necessary support for the next three dives.

The first scheduled was on the Fort Missanabie wreck, a British armed freighter torpedoed in May 1944 off the coast of Roccella Jonica.

We arrived at the dive site after about ten minutes of sailing in a rubber dinghy. The heat was scorching and the sea slightly choppy. On the surface, a strong current suggested that both the descent and the ascent would require attention and commitment.

Fortunately, as we went deeper the current decreased to allow us a quiet patrol on the bottom.

The ship lied on a sandy bottom 78 meters deep and was broken into two sections which, resting on the bottom, formed a V. The stern half was in the navigation position while the bow half was upside down.

Visibility was acceptable and allows us, as we glided, to admire the impressive view of this wreck.

We walked along the upper part of the stern, armed with cannons that were rising towards the light, and then descended to the maximum depth to see its majestic propellers slightly raised from the bottom. We continued on the starboard side to penetrate between the plates and I paused on the vaults covered with a myriad of shrimps. Some moray eels and a couple of big snouts dwell in the penumbra.

When we reached the point where the ship is broken, we continued towards the bow to see the anchors, also upside down, in an unnatural position.

Our bottom time is about to expire and we opted to return towards the stern crossing the stretch of sand that connects it with the bow. It was a few meters path that was made easier thanks to a strobe light that they had positioned on the top of the ascent.

In the afternoon, the wreck of the Pasubio awaited us, a cargo ship lying on the left side on a sandy bottom at a depth of 44 meters.

In 1943 it was sailing along the Ionian coasts of Calabria when it was hit by a torpedo launched by a British submarine, near Roccella Ionica.
We hit the wreck on the right side forward at a bathymetry of 35 meters, near one of the two cargo masts, both broken.
We continued our patrol on the deck, penetrating the holds, to get to the stern where we came across the large rudder and further down the propeller blades.

On Wednesday we ended with a flourish with the submarine of the Regia Marina Ammiraglio Millo.

On March 14, 1942, while he was sailing on the surface off Punta Stilo, two torpedoes launched by an English submarine hit him in the center and aft, sinking him almost immediately. She brought with her 57 Italian sailors.

Today the wreck of the Millo lies, inclined on the undamaged side, at a depth of 70 meters about 2.5 miles from the Punta Stilo lighthouse. It is about 90 meters long and 8 meters wide.

The descent was easy and a little disturbed by the current. Fortunately, the visibility allowed us to observe the tapered shape of the submarine from above.

We carried with us a tricolor flag to lay in honor of our deceased sailors.
The gashes of the torpedoes that sunk it are clearly visible and allow a brief view of a part of the interior.

Continuing towards the stern, on the deck we found a machine gun which was still intact. Just beyond the imposing turret. 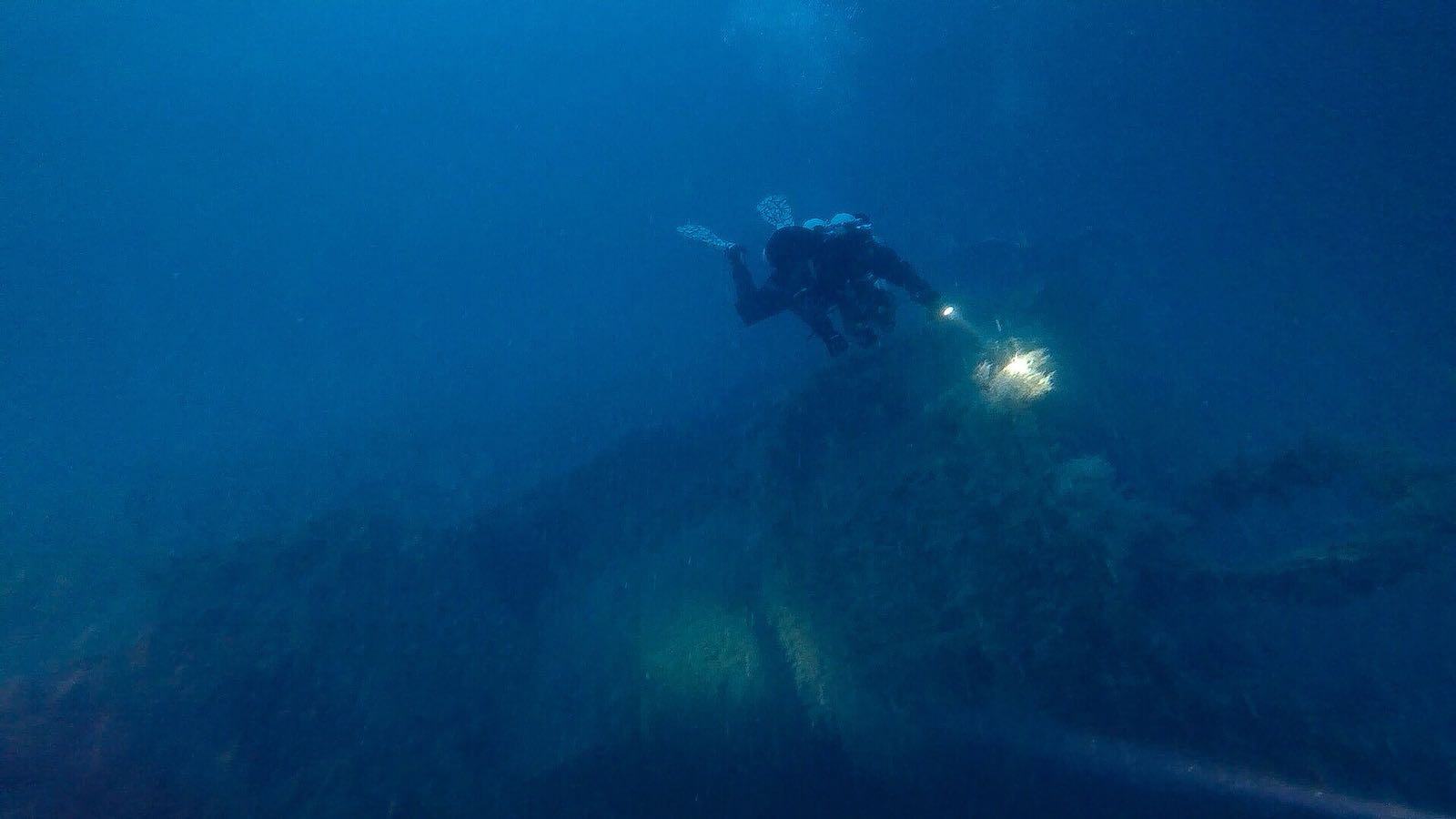 No other penetration was possible.

Time to go back. On Thursday morning, we left to reach the Brindisi airport from which we reached our departure destinations.

It was time to take stock.
The first XR tour attracted 4 XR trainers and 5 XR instructors. Thanks to the contribution of 3 SSI affiliated diving centers we were able to dive on five of the most important wrecks sunk near the Salento and Calabrian coasts. All with a weekly run time of over 600 minutes.

We were provided with support:

Get the next story’s preview! Subscribe to our newsletter

Underwatertales is a set of diving stories for who loves the sea, the ones who dive and who will start doing so.

UnderwaterTales is a container (blog) of underwater stories for scuba divers, for those who want to start diving and those who just prefer to read them.
Contact me: