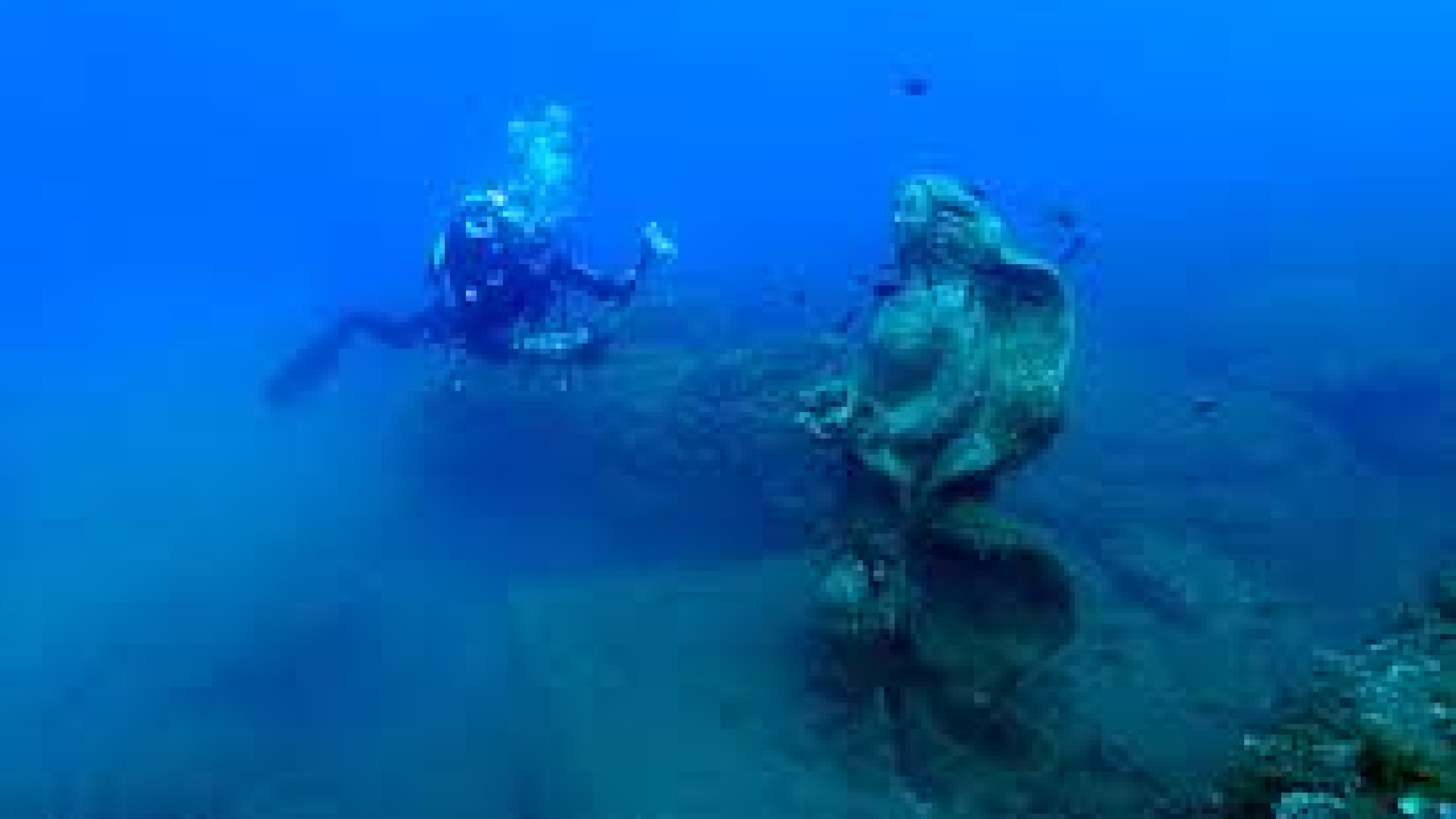 The story of Zoagli’s Madonnina del Mare began in the summer of 1986 but reached its peak ten years later. The storm of 2018 tore it from its base and moved it to an unknown place. Three years later it was found.

Zoagli and its pedestrian cliff

Zoagli is a small village, a jewel set between Rapallo and Chiavari, in the middle of the wonderful scenery that the Gulf of Tigullio enriches us with.

Today it is a popular and sought-after seaside resort, famous for its scenic pedestrian cliff. It is built close to the turquoise and tempting sea.

From the small town center, you can go visit, through the characteristic crêuze, the houses that can be seen from the sea. They are hidden between the Mediterranean scrub and the flowers of the Bougainville. From the windows, you can admire an enchanting landscape. It is the stretch of sea that leads from Santa Margherita Ligure to Portofino. Its point is dominated by a lighthouse which enlightens the way to sailors.

The Zoagliesi and the sea

The bond that the people of Zoagli have built with the sea, over time, is an old and consolidated relationship. Zoagli has had a very long series of “sailors” who have faced the dangers of the oceans.

The Porcella, the Chighizzola, the Merello, and the Canevaro were once great shipowners and capable captains. In the nineteenth century, they sailed the seas of South America. They rounded the dangerous Cape Horn and reached Chile and Peru.

But the most famous family of this group of shipowners and captains was the Canevaro family. The ships of Count Giuseppe Canevaro were decisive in 1859. When they quickly transported the French troops to the bloody theaters where the battles of the Second War of Independence took place. For these merits, he obtained from his friend Camillo Benso Count of Cavour the noble title of Count of Zoagli. His heir, Admiral Felice Napoleone Canevaro, even became Minister of the Navy of the Italian Kingdom. He commanded the united fleet that protected Crete from the Turkish invasion of 1896.

It was precise to remember the many citizens of Zoagli who drew their reason for living from the sea that in 1985 this story began. That of the Madonnina del Mare in Zoagli.

The idea came from a group of friends who loved to spend their summers there. It got immediately supported by the local citizens. “Foresti” and natives collaborated to the realization of a bronze statue. It depicted the Virgin to be placed on the bottom of the sea, facing the eastern promenade.

In the summer of 1986, the sculptor Marianne Hastianatte created a statue just 80 centimeters high. The real name of this artist was Maria Allaro and, originally, she was from Catanzaro. She moved to Zoagli in the mid-70s and she lived in Zoagli until her death. The statuette, after an evocative religious ceremony, culminating in the moving blessing of the then parish priest, was placed on the seabed by divers. There she was supposed to stay to protect all seafarers.

The initial goal of the promoters was to create a one-meter-sixty sculpture. But the scarce economic means did not allow it.

In 1994, the project took off again with the official constitution of the “Madonnina del Mare Committee“. The noble objective was that of making a bronze statue depicting the Virgin Mary. Then, It would have been installed on the Zoagli seabed.

The tenacious commitment of the Committee and the generous donations from institutions, foundations and commercial companies allowed the realization of the work. Which was produced by a foundry in Pietrasanta.

Therefore, in August 1996, the promoters’ dream came true in a splendid and bright summer evening with the laying of the “Madonnina del Mare” on the sea bed. That same Saturday, over 3000 people took part, in the demonstration in the stretch of water in front of Zoagli. At eleven in the evening, the splendid sculpture, conceived by the same artist who created the first work and created by the Massimo Del Chiaro foundry, was positioned in the water. Before being placed in her new home, nine meters deep, the sculpture obtained the blessing from the Bishop of Chiavari. While the Navy had sent the Grenadier frigate whose band, together with that of the Naval Academy of Livorno, ennobled the event.

Da quel giorno, il Golfo del Tigullio aveva un nuovo sito subacqueo religioso. Unitamente al ben più cEver since that day, the Gulf of Tigullio had a new religious underwater site. Together with the much more famous Christ of the Abyss, in the bay of San Fruttuoso. And it is due to the many divers, who dive in these crystalline waters, that the charm of this place increased. With plenty of marine life and accessible to anyone.

For many years an underwater photographic competition was also organized which over time attracted the participation of listed photographers. Their shots are collected by Gianni Risso entitled “La Madonnina del Mare – Zoagli 1985-2010”.

I have only been there once with scuba tanks, on a very warm July afternoon a few years ago. Summer seemed to have broken out suddenly and temperatures almost reached 40 degrees quite quickly. I was called to help manage a “team-building” day, organized by a prestigious company in Genoa. The events also included a diving trial. It was so warm that, contrary to my diving habits related to me being cold, I wore a wetsuit. And never as on that occasion did I feel pleasure in feeling the freshwater which was cooling my body made piping hot by the temperatures.

On many other occasions, I decided to swim there, from the Zoagli beach.

I often went to sunbathe at Bagni Silvano, with two friends. One is my diving partner while the other is a world champion in freediving. The record holder kindly challenged us to swim up to the Madonnina and then reach it in apnea and re-emerge. For him, it was a game, for me and the other guy a feat.

On 29 October 2018, the Ligurian coasts were hit by the most violent storm of our times. Already during the previous days, violent phenomena of torrential rain affected the entire Ligurian territory. With significant accumulations of water recorded in the short term and with the presence of landslides and floods in various municipalities. In addition to the intense rain phenomena, a greater danger and severe damage were recorded due to the vigorous gusts of wind which, in the eastern Ligurian territory, were even higher than 120 kilometers per hour. The resulting storm surges, also fueled by the force of the wind, actually affected the entire stretch of the Ligurian coast, especially in the Savona area, in the Genoese area, and, dramatically, in the Tigullio area.

The drama of Rapallo and Santa margherita Ligure

A force, that of the sea, which also crashed against the port infrastructures of Santa Margherita Ligure and Rapallo, with the collapse of the respective breakwaters. The sudden collapse of some sections of the containment walls caused a consequent vulnerability of the ports themselves, but also the stretch of coast of the two cities of western Tigullio, with flooding and damage to the promenades and commercial activities. Towards Portofino, the fury of the sea caused the entire subsidence of a stretch of provincial road near the hamlet of Paraggi and conspicuous and serious damage to the structure of the Covo di Nordest, the well-known nightclub in the area. In Rapallo, the destruction of the breakwater caused greater damage. With the sinking of boats in the area between the public and private ports and, and the breaking of the various moorings, hundreds of boats and yachts that, adrift and due to the wave motion of the sea, were transported outside of the port of “Carlo Riva”. They ended up sinking in the Gulf of Rapallo or definitively “beached” themselves largely near the embankment of the seafront.

The disappearance of the Madonnina del Mare

In Zoagli, further damage from the storm was recorded with the collapse of some sections of the wonderful pedestrian cliff that was built close to the sea, which that day was anything but calm and crystalline. The waves tore the Madonnina di Zoagli from its reinforced concrete base and moved it to a place unknown to all of us. Nobody knew where it had been transported.

But a Milanese diver, Alessandro Caccia, has a house in Zoagli. He is used to spending every summer here. Probably, he uses every day of vacation or leaves to dive into what has now become his “he waters”. He, who was also president of the Goggler Club of Milan, the longest-running Italian diving club, in his underwater wandering came across a small piece of metal protruding from the sandy bottom.

Forse l’esperto sommozzatore ha subito capito di essersi imbattuto nella famosa statuetta, oppure no. Perhaps the expert diver immediately realized that he had come across the famous statuette, or maybe not. But he started lifting the sand with his hand, slowly so as not to create a useless suspension wall. And slowly the Madonnina of Zoagli returned to the blurred light of the sandy bottom of Zoagli. Alessandro memorized the path that had led him up there, came back several times, took the measurements on the ground, drew maps, and reported the discovery to the competent authorities.

Today, exactly three years after that disaster, we are here, in front of the eastern pedestrian cliff, now completely rebuilt. The sun is shining, the air is crisp and we are on the boat of the Massub Diving Center in Lavagna. At the helm is another Alexander, long hair, unkempt beard, and Viking eyes. His pores exude the enthusiasm that he infects, the curiosity of the child, and the desire to demonstrate to the whole world that even at the age of thirty you can do the things of adults. His name is Alessandro Boschi and, together with his brother Luca, from this year he manages the diving center that you will find, right on the sea, in the port of Lavagna.

The testimony of the discovery

Alessandro Caccia gave his maps to Alessandro Boschi who, exactly three years after the violent and terrible storm, together with an underwater video operator found and filmed the precious bronze statuette, half-hidden in the sand. The filming was by Gianni Miloro, Botak, for the underwater world.

To plan the day, both from an organizational and media point of view, a volcanic underwater divulger who looks like the scientist from “Back to the future” thought of it. He is Gianni Risso, a freelance journalist since 1972, but above all a historical memory of Italian diving. In Tele Genova, he leads a program dedicated to the sea and its abysses.